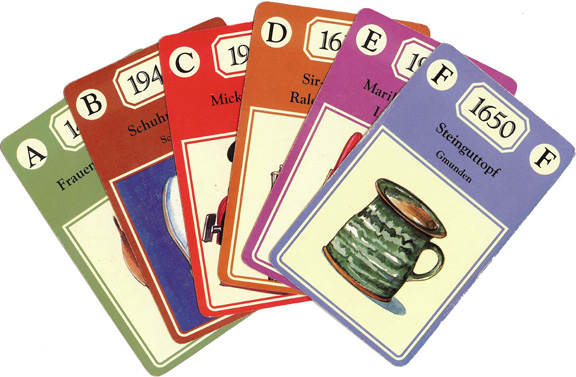 Derek Landel takes set-building and a mid-game sprint all the way to the finish line -- and holds on against the bigger sets of Allan Jiang and Chris Trimmer to win it all.  Many thanks to AJ for supplying the details of the game.  Dominic Blais sprinted to the mid-board lead but had been so annihilated by thieves that his position never recovered.  Haakon got both thieves in jail to hamper his set-building and leave him far behind.  Interestingly, everyone but Chris finished with at least one card that he couldn't exhibit.

Allan's Report:  Haakon was the first to exhibit, but it was Dominic who took a large early game lead, getting more than halfway on the board, while the rest of the players were still at or near the start. Meanwhile, Derek took a lead with 7 items while everyone else had 4 or 5.
In the midgame, Dominic stalled as he had to try to rebuild his pilfered set. Haakon also ran into trouble with both thieves in jail and poor luck at the auction house. Chris, Allan, and Derek all did well with set-building, but Derek was the most successful on the board, passing Dominic for the lead.
Derek continued to push the pace in the late game, and triggered the end of the game, moving a full 5 spaces past the finish line. Chris and Allan took the best two endgame exhibits, which moved them past Dominic, but not enough to catch up to Derek.
Congratulations to Derek Landel for winning the tournament!

Each of the ten semi-finalists plays two semi-finals -- the winners advance as does the single best second-place finish.  Derek Landel wins a close game in one semi-final and pulls down second in the other; Dominic Blais is just one space behind.  Allan Jiang (AJ) wins his semi-final after passing early-sprinter John Pack by two spaces.  Haakon wins a one-space victory over Derek by finishing way ahead of the biggest set holders, Derek, and AJ.    Chris Trimmer wins his semi-final with a massive 12-card set, just ahead of Doug Galullo's 11-card set, the two largest sets of the semi-final.  Dominic sprints across the finish line but finishes second when Chris' 8-space advance is recorded.  Dominic gets the last spot in the semi-final by virtue of a 3-space second-place finish.  John Pack's best second is only 2-spaces -- giving him sixth in the laurel standings.

Post-pandemic inflation?   I think it's a myth.  Kevin Wojtaszczyk manages to secure a D-1616 ornate pipe that belonged to Sir Walter Raleigh for a mere $3,000.  Not to be outdone, Allan Jiang got a A-1468 Mask of Shame from the bargain bin for $1,000.  With bargains like those available, perhaps we need to go shopping?!  Allan Jiang does exactly that -- spending all four of his checks before anyone passed the center 2/1 zone.

Ken Gutermuth and Cary Morris put on a show in Game #2 -- with a tie on the 7th space of the final table!  They brought the two best exhibits of the game with them -- 9 cards (oldest 1760) vs. 5 cards (oldest 1468) -- giving Ken the win even though SpielByWeb shows Cary first (SpielByWeb uses color order when two players are on the same space).  Dominic Blais also made it to the table in that one, earning two spaces.  The 11 cards in that game that were not connected to four players' sets suggest a bruising finish!

Sharee Pack won three games without a set.  She claims that her second place finish could have been improved if only the other players had stolen another artwork or two.  On the other hand, Doug Galullo prefers to have the 5-space exhibit on the final turn, the largest set (11 cards with the A1468), and to finish on the 13th space for a perfect finish (giving him a total of 19 spaces, the most of any player in the preliminaries).  Chris Trimmer collects the most cards, 52, and keeps them all connected.  Sharee collected just 19 -- and only 3 were connected.

Haakon Monsen and Sharee earn their golden tickets and top seeding to the semi-finals with 21 points.  Chris and Dominic qualify with 19 while Allan, Thomas Browne, and John Pack score 18.

As usual, some-but-not-all players with 17 points qualify for the semi-finals.  Doug's 19 spaces and Derek Landel's 8 spaces earn golden tickets.  The final two with 17 points both have 3 spaces.  The second tie-breaker, creating games, also doesn't decide it.  The third tie-breaker is the total set size.  Tim Mossman prevails with 45 (all connected) over Michael McKibbin's 38 (with two unconnected).