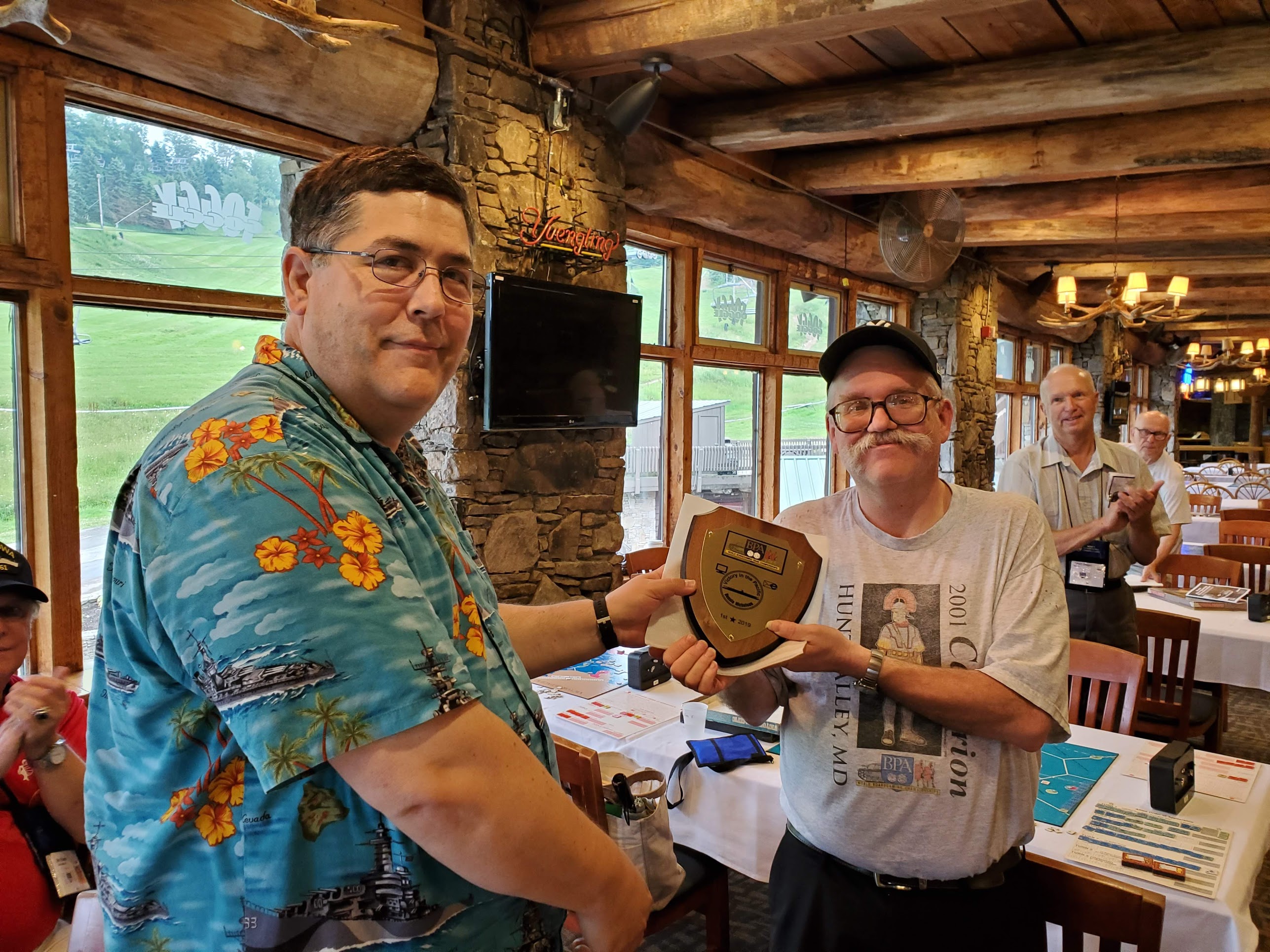 Thirty-one becomes two.  Tim Tow took the Japanese for 1.5 POC and took six aircraft carriers to Pearl Harbor to catch Dennis Nicholson by surprise -- using the West Coast Escape version of the Menzel options.  By the end of Turn 6, the IJN score had dwindled to 9, and the emperor order capitulation.  Two became one, and Dennis Nicholson was crowned champion of the fleets!  Over-all, the IJN prevailed in 10 matches while the USN dominated by winning 18 games.  The power to shift the balance of the Menzel and Open Turn Two options is evident in the first tournament to be dominated by the USN in over two decades.  Unadjusted games saw bidding up to 8 POC; while these two adjustments saw balanced bidding for both sides (with Tim's 1.5 being the highest for the IJN).

The semi-finals are split -- between sides and between high and low seeds.  Tim Tow's IJN defeats Alan Applebaum's USN when an all-out Pearl Harbor defense on Turn Two goes South.  After first round attrition, the lone Hosho guards the invasion and sinks two BB setting up massive USN surface losses in three night rounds to end the match.  In the other game, Dennis Nicholson's USN (for which he bid 2.5 using the Menzel options) prevails over Wayne Bonnett's Cinderella IJN by a half-POC after all eight turns.

The USN adds to its dominance with a 3-1 showing in the quarterfinals as three games use the Menzel options.  Three of the top four seeds are also eliminated as none of the games go past Turn Six.  Vince Meconi, the top seed, is eliminated by a surprise British win in Indonesia on Turn Two followed by a crushing Allied LBA win to save Pearl Harbor on Turn Three.  Alan Applebaum is the highest seed remaining followed by Dennis Nicholson, Tim Tow, and Wayne Bonnett.  Wayne keeps his dark horse status moving forward by having more aircraft carriers alive as the USN at the end of Turn Five than the IJN.

The second round sees both of the top seeds eliminated in their first games.  The tops seeds prefer the IJN 6-2 -- but the final results are dead-even with the USN winning four matches to equal the IJN's record.  Four games use the Menzel options -- and see the USN prevail in three.  Eight uses of now retired adjustments appear; those go tellingly 3-1 in favor of the Japanese.  Wayne Bonnett becomes the tournament dark horse by flipping Singapore on Turn Five to defeat Michael Day (two-time finalist and four-time semi-finalist).  John Sharp, whose 12th seed does not do his skill justice, sends Mike Kaye ashore; both have collided in the Top 10 Invitational before!  Vince Meconi wins by establishing the Full Applebaum while Alan Applebaum wins an 8-turn marathon over Rob Drozd.  Tim Tow wins an old-fashioned TKO -- by crushing the US Navy on Turn 3 so badly that it drew a surrender without isolating both Pearl Harbor and Samoa.

Thirty-one entrants kick off the new tournament.  The first round shows that, aside from three byes in the first round only, there will be no easy games in this tournament!  Four upsets depose top seeds right off the bat with Wayne Bonnett, Hilton McManus, Jeff Miller, and and Lee Furguson moving ahead.  Nine USN wins vs. four IJN wins continue Allied dominance of late.  Six games voluntarily feature options that bring the game into balance.  In the optionless games, the IJN loses both after bids of 6 and 8.  Mike Ussery posts the IJN's biggest win with a 5.5 POC margin while Rob Drozd manages to win with a Western Anti-British Strategy.  Sixteen advance to the second round for an orderly set of pairings!

Back to Main Tournament Page

Victory in the Pacific® is a registered trademark of The Avalon Hill Game Company.